Everything you need to know

With so little information on Albania’s capital, Tirana, it was difficult to even find the most basic information that a traveller would need to know – where to stay, food, travel, things to do. There’s a rich history reported online, but more for educational purposes rather than helping a fellow explorer. Fortunately, we’ve been there, loved it, lived to tell the tale and can share everything you need to know. 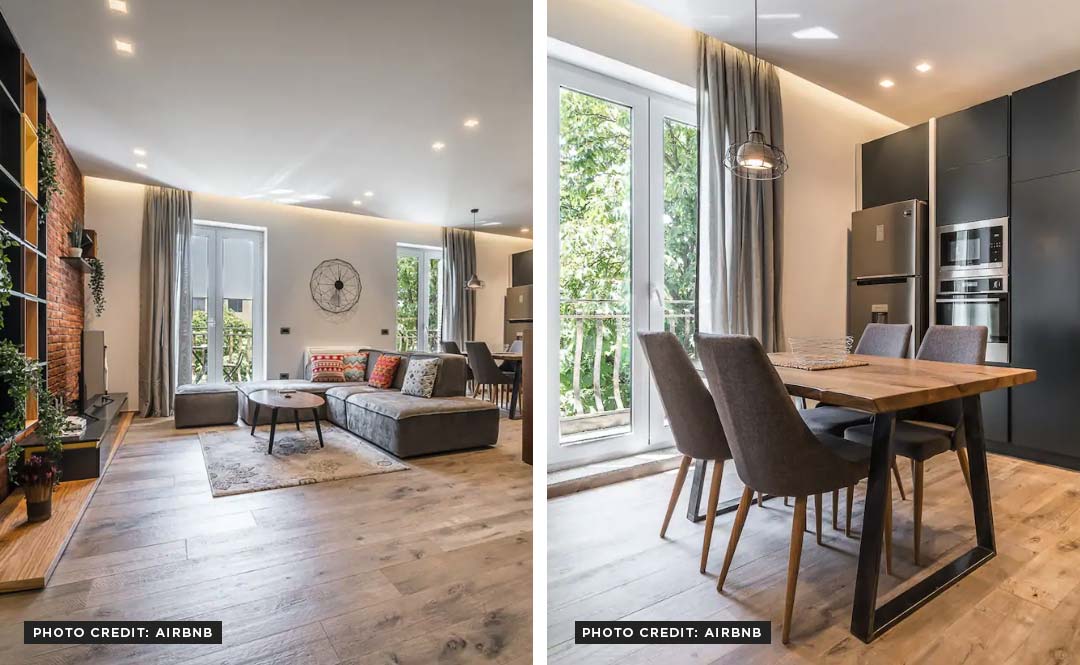 In our opinion the answer is Blloku. Although Blloku has now be shortened, the name literally translates to ‘Ex-Block’ and is where the communist elites (including the ex-dictator, Enver Hoxha) lived during the communist years — strangely it’s now the most desirable part of town. Staying in Blloku comes with a higher price tag than other parts of town but considering the walkability, proximity to the top sites and abundance of amazing bars, restaurants and cafes, it’s worth it. This part of town really surprised us and we’ll openly admit that we didn’t expect to find modern architecture, beautiful interior design, Asian fusion restaurants and luxury cars everywhere we looked in the heart of Tirana. There’s not too many hotels here, so we recommend checking out the Blloku area on Airbnb, sign up with a new email address here to get $40 USD off anywhere you book in the world. 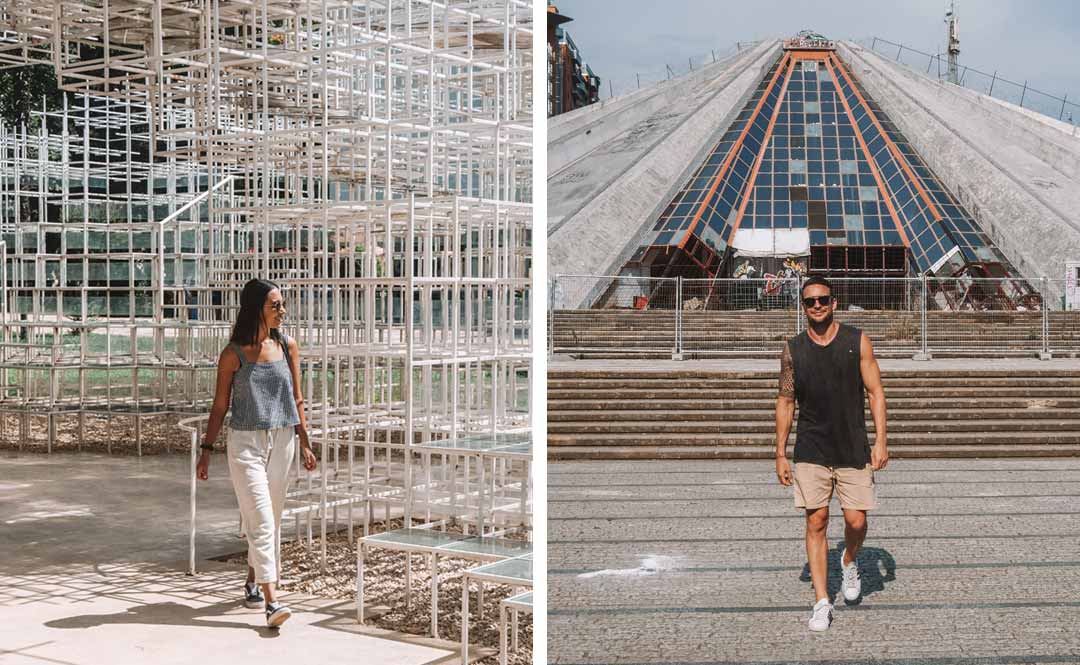 Tirana is a super walkable city, which we loved, so if you base yourself in the Blloku area you will definitely save money on transport. During our two weeks we didn’t need to catch a taxi or take public transport once. If you’re visiting in the peak of summer just make sure you pack some high performance deodorant and sunblock because it gets very toasty in the city! If you do find yourself in a situation where you need to grab a taxi, as of July 2019 Tirana doesn’t allow Uber, so it’s all about the hustle. There’s no shortage of taxis furiously swerving in and out of traffic so you won’t struggle to find one should you need it.

Pro tip: When you cross the street don’t forget to look left and right the entire way across. Drivers in Tirana mean business and they zip around like they’re late to catch a flight or driving their wife to the hospital, while she’s in labour. 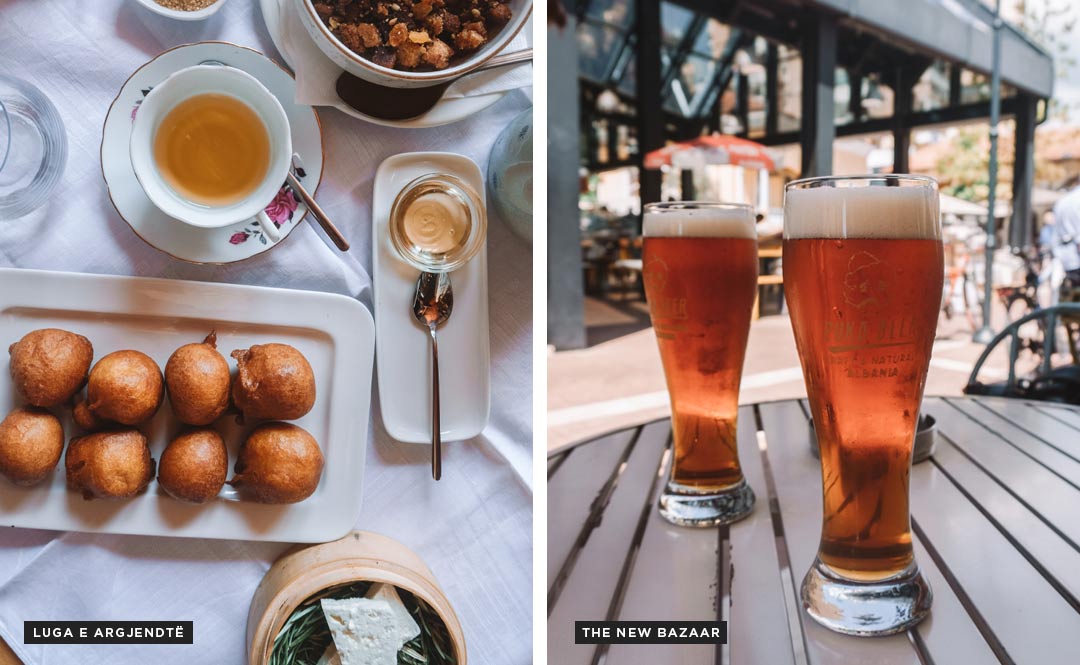 The food in Albania is similar in way to a lot of Balkan cuisine, but with it’s own flare. We’ve got a vlog coming soon that features an awesome food tour we took and showed us a huge amount of the city. In Blloku specifically, it’s fair to say the café culture is booming, they’re absolutely everywhere! As New Zealanders something we struggled with was the amount of smokers at cafes, bars and restaurants — the laws on where you can / can’t smoke in NZ are extremely strict. There were multiple instances where we would be enjoying a meal or coffee outside and all of a sudden became engulfed in a cloud of second hand smoke. If you prefer not to inhale someone else’s choice, take a seat inside. Below is a list of some of our favourite places to eat and drink across Tirana:

There’s so much to see and do in Tirana, everything is wrapped in these incredible tales and rich history as well! Vlog coming soon, but here are some favs:

In the middle of Tirana is an enormous, ominous looking triangle structure. It’s known as the Tirana Pyramid and was originally constructed in 1988 to honour the dictator, Enver Hoxha. After the fall of communism, the building was repurposed a few different but now it seems like the city isn’t sure what to do with it. Given that it was said to be the most expensive individual structure constructed in Albania at the time, it’s understandable that they haven’t simply taken to it with a bulldozer. It feels eerie being up close and personal. There’s a chain-link fence that surrounds it with human-sized gaps to get through. Vandals have completely destroyed the inside so although it’s unsafe to enter, people still scale the steep outer slopes to get a view from the top. It’s all fun and games until it comes time to slide back down, so if you do decide to climb it – take care when coming back down.

This is a must-do in order to better understand the history of Albania. Bunk’Art2 is a nuclear bunker that has been transformed into a museum. Everywhere you go in Albania you’ll see bunkers — on the side of a mountain, in the middle of a playground, on the beach, everywhere. It’s believed that Enver Hoxha ordered over 750,000 of these terrifying looking mushroom shaped bunkers to be built during his reign as dictator. Fearing an invasion (that never happened) he succeeded in creating a culture of fear and paranoia amongst the Albanian people. Fast-forward to today, and you’ll see a few of these bunkers have been repurposed as hotels, bars and even homes. The Bunk’Art2 museum aims to take visitors on a journey through the dark history and although you might emerge with a heavy heart, it will also give you a deeper appreciation for every smile you see on the faces of the Albanian people.

This is possibly the largest central square we have ever seen! It’s located in the heart of the city and is an insane 40,000 square meters. It’s also where you’ll find all the major sites like museums, the palace of culture, Et’hem Mosque and the clock tower. If you’re like us and can only take so many museums, pull up a seat on the perimeter and watch the world go by. Or even play a game of ‘spot the tourists’ while you people watch, you won’t see many! 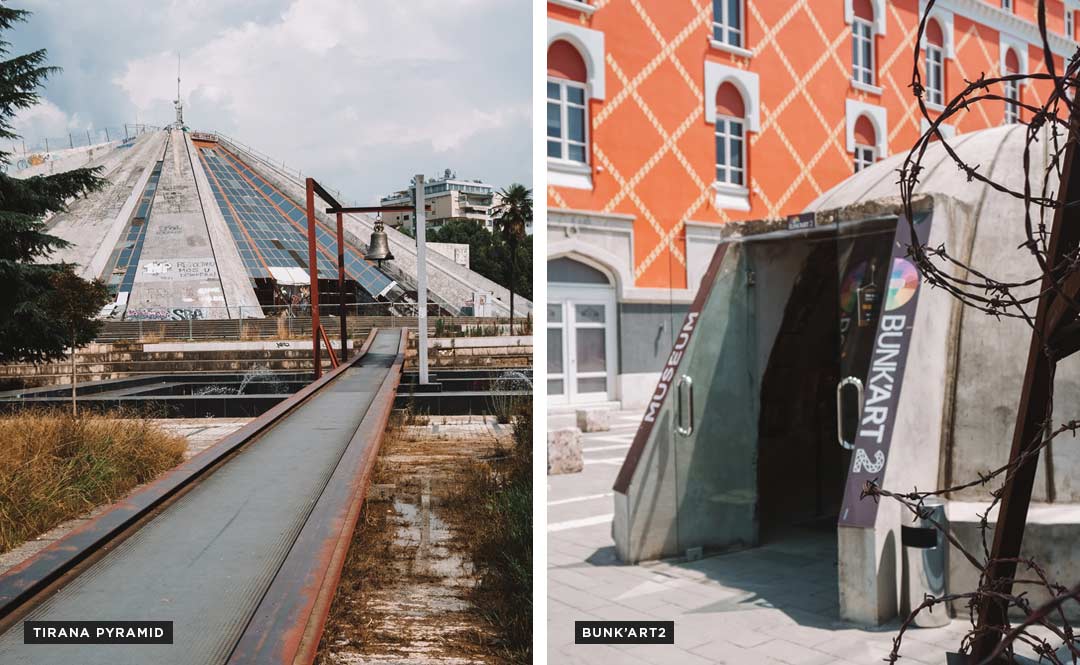 If you like Greek food, chances are you’ll like Albanian food too. Their cuisine is like the perfect marriage between the Mediterranean and Balkans! To learn a little more we enlisted the help of a local guide from Albanian Food Tours who took us on one hell of a culinary journey. The tour was a mix of sweet and savoury with local drinks thrown in for good measure. A highlight was definitely Albanian donuts with honey and feta cheese. We always recommend taking a food tour when you first arrive in a new city to help you get established. Your guide can help answer any questions you might have about local customs, nearby attractions, fill you in on the history and of course show you all the best spots for food.

From the boxes on every street corner to huge murals, everywhere you look in Tirana you’ll see colour. This is not something we expected to see considering grey was the unfortunate colour of choice for most communist-era architecture. When Edi Rama was elected mayor he decided to campaign to bring colour back to the city. Being an artist, he believed that colour brings joy and revives hope and we totally agree. The most iconic colour block you’ll find in Tirana is the rainbow building in Wilson Square, Blloku. The colourful makeover has given the city an amazing vibe and you never quite know what to expect around every corner.

Bring Cash – In Tirana you can pay with card in a decent amount of established restaurants and cafes, but as soon as you venture outside of that be prepared to pay in cash for just about everything. Even hotels that we booked online through Agoda required us to pay in cash upon check out.

Phone Plans – Take your pick between T-Mobile and Vodafone. We chose to go with Vodafone because we were bombarded with their advertising everywhere we looked (maybe we were brainwashed?). We opted for a 2 week tourist data SIM and paid 1300Lek for a 10GB data plan. They had great signal and speeds throughout Tirana and the rest of the country as we ventured South to explore more of the coast. We also popped into T-Mobile and they have an identical plan, so it probably doesn’t matter too much, there’s plenty of value in the plan regardless of which way you go. 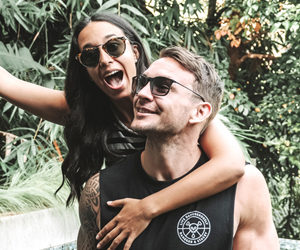 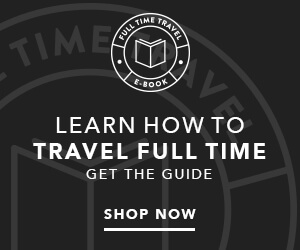 Join our mailing list to be the first to know about all things Daneger and Stacey! Likely only a few emails a month featuring discounts, updates, travel tips and more. P.s this is a spam free zone and we respect your privacy. 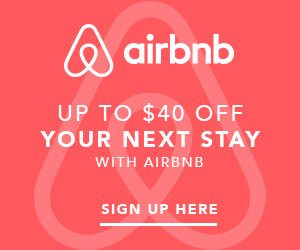